Having departed Ft. Ellice, our group travels still west of the river. The country here is ragged, irregular. It is a land of undergrowth and large willow. Pines on the ridges. There are many small creeks, and the path is very bad. We must wind our horses about the mounds and hollows. There are occasional green woods, and the tall grass goes as far as the eye can see, yet no bison. Will tally any herds encountered. (Letter from Jamie, 1857)

When Marguerite reached the tiny house with the Assiniboine River ambling by and its thickets of linden and maple awash in hues of autumn, she found an anchor once again. Walking the length of the wooded lot, she made plans for a garden and chose a building site overlooking the river. In her first letter to Jamie, she named the property ‘Deer Lodge’ for its abundance of spotted deer, rabbit, and partridge. Marguerite’s strength and steadfast hope had found mooring in these new spaces, in the dreams she’d kept afloat all these years.

Jamie had become a regular guide for George Simpson and summer of 1857, he joined the Palliser Expedition at Fort Ellice. With the support of the Royal Geographical Society, Jamie guided John Palliser and his crew of scientists across the Saskatchewan plain to Fort Carlton. As usual, Jamie wrote to Marguerite describing for her the geography, the weather, the flora and fauna that so enamoured them both. He spoke to changes in the landscape over time, and his fears of another insufficient bison harvest. What in later years would become a movement, the naturalist sensibility was something Marguerite and Jamie shared from the beginning. Jamie’s letters were the passageway to realms Marguerite might never encounter, their love of knowledge a gift they shared to the end.

Having departed Ft. Ellice, our group travels still west of the river. The country here is ragged, irregular. It is a land of undergrowth and large willow. Pines on the ridges. There are many small creeks, and the path is very bad. We must wind our horses about the mounds and hollows. There are occasional green woods, and the tall grass goes as far as the eye can see, yet no bison. Will tally any herds encountered.

The heat was very heavy today, clouds from the northwest caught us before we could erect the tents. It reminded me of the stories your father told about rain in the tropics. Meant to extinguish the lamps at dark as not to attract bugs, but my attempts were met with heedless curiosity. Travelling companion and botanist, Eugène Bourgeau, has been collecting specimens for his catalogue.

Walked about the caves of Roche Percée yesterday. You would enjoy the wild formations, appearing like a stone wave. One day we will visit them together. Arriving at Ft. Carlton November at earliest.

After establishing two posts in Minnesota for the HBC, Jamie opted out of re-signing his contract and made tracks for home to the loch of his heart, Deer Lodge, whereupon he and Marguerite were married on June 17th, 1859. Without delay, the McKay’s began construction of a grand new home with a wide veranda overlooking the river, and Jamie joined 1200 Métis citizens in one of the last successful, community-wide bison hunts of the century. Marguerite became a mother, and built a harbour for them all; she was the anchor in the storm.

The family was rocked by the loss of their sister Adelaide (possibly from TB) which set a murky tone over the coming years. Marguerite gave birth to daughter Marie Sophie in November of 1861; however, the baby died in October 1862, not quite a year old. The following year, the McKays celebrated the birth of twins, Jane Dalles and John Henri, born in late summer of 1863. The currents of grief rose and fell with the death of their sister Sophie in September of 1864 bringing another undulation of sorrow. The McKay’s second son, James Alexander, was born in March of 1866. Sadly, little John Henri passed away in autumn of that same year, just three years old. The McKays found a measure of consolation in the adoption of ten-year-old Augusta who had been residing with the Grey Nuns after her parents were killed by the Sioux. At the same time, Jamie’s trading and freighting business was flourishing; he’d also become the first mail carrier between the settlement and St. Paul, Minnesota. Fittingly, Deer Lodge was the local post office for a time. Marguerite and the children thoroughly enjoyed reading the To: and From: addresses scrawled upon each envelope and parcel.

Three provinces united to create the Dominion of Canada, on July 1, 1867. By 1868, Jamie had joined the Council of Assiniboia. In the same year, Louis Riel returned to the settlement, and in 1869 the minister of Canada’s public works ordered a survey of Red River, setting off a series of unfathomable events. Aspirations of sovereignty in the face of annexation lead to a summer of fiery speeches on church steps, followed by the confrontation between Riel and the Dominion land surveyors. When Riel ousted the Governor of Rupert’s land, James McKay was torn between worlds, once more; between that of the land and all it encompassed for the Métis Nation, and the glimmer of a newly born Canada promising broader unity and equality of industry. Like Marguerite, Jamie held hope for his community, so he kept the peace as a civil servant. In 1870, James McKay sat with Riel in the Provisional Government of Assiniboia, negotiating fruitlessly with emissaries through winter. By May, the Manitoba Act was signed, and the Métis homeland became the fifth province of Canada. Jamie lent his linguistic acumen as a negotiator of Treaties 1 to 4 in his thirst for balance, and later he sat as co-commissioner of Treaty 5 and Indian Commissioner of Treaty 6 in anticipation of the coming tsunami. Jamie knew the land, and its people, were in peril.

Three provinces, New Brunswick, Nova Scotia and Upper/Lower Canada were united to create the Dominion of Canada, on July 1, 1867. Seasoned by his political experience as a member of the Council of Assiniboia, McKay spent much of 1868 acting as a liaison between government officials and his brethren. For that same year, sovereigntist Louis Riel returned to the settlement adding fuel to the fire of Métis colonial resistance. On March 20, 1869, the Dominion bought the entirety of Hudson’s Bay Company land holdings, their Métis motherland included. Facing annexation, James McKay made a most noble effort to dampen the tensions in his community, but aspirations of sovereignty for the newly formed National Committee of the Métis lead to a summer of fiery political speeches on church steps, followed by the confrontation between Riel and Dominion land surveyors. By winter, a revolution had arisen. On the second of November 1869, the Métis captured Upper Fort Garry and James McKay was torn between worlds once more; between that of the land and all it encompassed for the Métis nation, and the glimmer of a newly born Canada promising broader unity and equality of industry. Early 1870 was a time of optimism, a sense of collectivity amongst the ‘Council of Forty’ had culminated in a bill of rights outlining aspirations for Métis nationhood. Wanting the best for his community, Jamie continued his work as a civil servant, negotiating tirelessly with government emissaries through winter. Despite Jamie’s efforts, ambitions of Métis independence were dashed when the Dominion named Manitoba the fifth province of Canada, on July 15, 1870. By August, Dominion troops had arrived to quash Métis political defiance. There were grave changes ahead, and the resistance had just begun. Jamie knew the land, and its people, were in peril. In his thirst for balance, McKay lent his linguistic acumen as a negotiator of Treaties 1 to 4, and later he sat as co-commissioner of Treaty 5 and Indian Commissioner of Treaty 6 in anticipation of the coming flood of European settlers which would alter his homelands forever.

The future of the bison population, as forecast by his early observance, was as grim as the nations they once supported. Sometime in 1873, Jamie and an associate captured three bison calves near Battleford, then gathered another three between Regina and Moose Jaw. One of the male calves died, but by 1879 the herd had grown to sixteen. This core group became one of five surviving populations in all of North America; every bison today is a descendant of that ancestral fold. Seeing the land altered by settler progress, their community ruptured by colonial governance, the McKays took Métis Scrip in 1875. Supported by Marguerite, Jamie became a Member of the Manitoba Legislative Council, serving as Speaker, then Minister of Agriculture until 1878. His capacity to moderate, to flow like water, was more powerful a force than icy inflexibility, as his wife would say. Marguerite died at Deer Lodge on February 18, 1879, surrounded by her children, and husband Jamie who sat at her bedside reading their old letters as she took her last breath. Marguerite’s obituary is a fitting reminder that a legacy of love is built upon seasons and by the weathering of storms over time, together. Jamie died the following winter on Dec 2, 1879 and was buried in the St Boniface cemetery close to Marguerite. 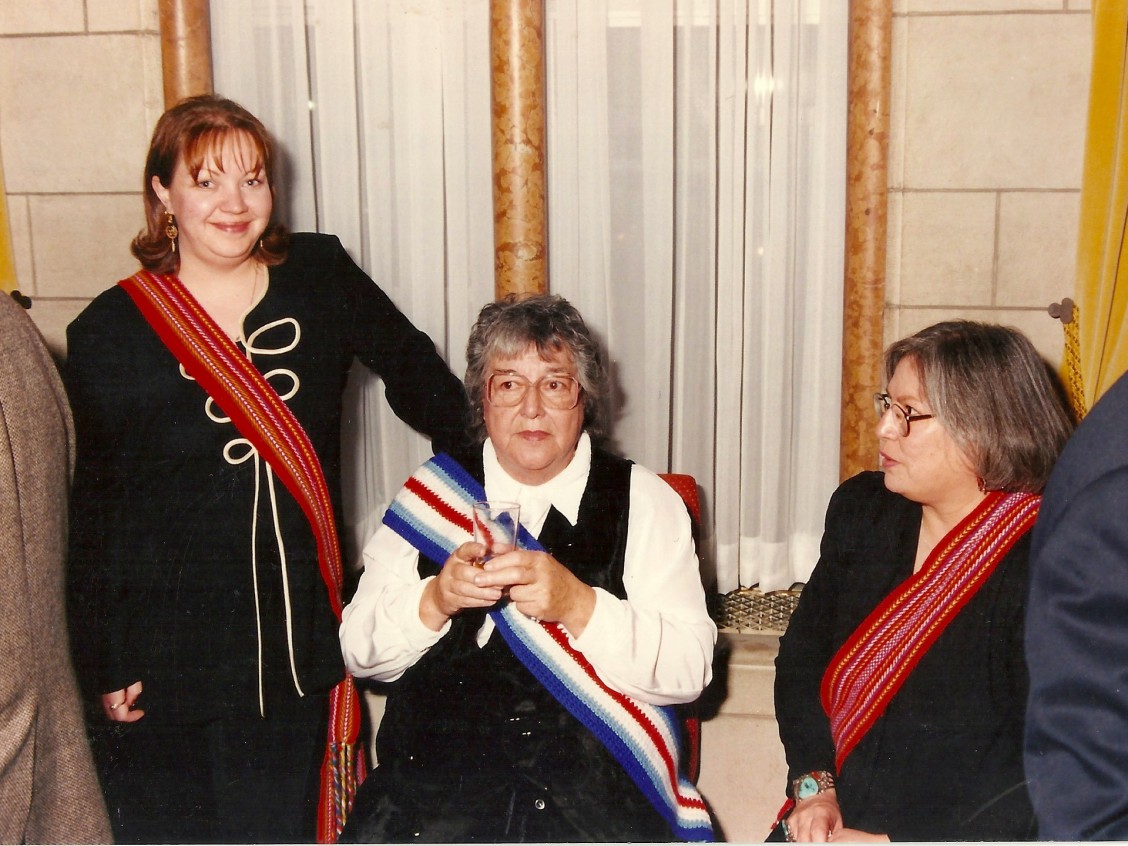