The very act of identifying as lesbian in Edmonton in the 1980s was politicized. Some members wanted the group to take a more public stance about who they were. Liz Massiah, who was Womonspace’s public affairs officer, was surprised by how much fear there was around being more open. “The organization was very closeted. The people who initially started it did a great job and provided a safe place for women, but the overall message was ‘Don’t share, don’t talk, don’t let people know.’”

Womonspace was a social and recreational group for lesbians founded in 1981. Part of Edmonton’s LGBTQ landscape for over thirty years, it became the city’s longest running lesbian organization. Members organized dances, movie nights, game nights, sporting events, family picnics and other activities. They published their own newsletter and established a resource library where women could access literature by and about lesbians. They developed what former Womonspace president Agathe Gaulin called a “women’s culture” that was distinctive from the gay male culture that tended to dominate gay and lesbian organizations such as the Gay Alliance Towards Equality (GATE) and the city’s small gay bar scene.

The founders of Womonspace originally asked GATE if the organization could host a women’s dance; they were declined due to GATE’s mandate as a mixed group. However, GATE did provide the seed money for the first Womonspace dance in 1981. Subsequent dances proved profitable, and the women were able to pay back the seed money and use the profits from the dances to fund their new organization.

Womonspace was a safe place where women could gather, meet each other and be themselves. Former Womonspace member Lindy Pratch explained that, “those regular monthly dances really did feel like they were knitting together a community. Instead of a gathering of maybe five or ten women that would go to a house party, there would be a larger group of 100 or 150 women that were at a dance, so there was more of a sense of ‘we’re not alone’ and we can be ourselves in the space and enjoy ourselves.” Former member Liz Massiah said, “It was an important social network for people. They made friends, they played ball together. Of course, they were lesbians, so they had potluck.”

Womonspace dances were held at various community halls around the city. Riverdale Hall was one of the first venues which made sense as lesbians helped establish some of Edmonton’s first housing cooperatives, including one in the Riverdale neighbourhood. The gender pay gap meant lesbians often struggled to afford high rents, so co-ops were one major of way of coping with the inequity. When the group outgrew a hall’s capacity, or when less progressive members of a local community league realized that Womonspace was a lesbian organization, they would find a new venue. Hazeldean Hall was one of the biggest community halls in the city; many dances were held there until organizers were told that there had been a double booking and they moved to Bonnie Doon.

All Womonspace activities were volunteer-run. In the 1980s, some volunteers at the dances were tasked with providing security at the door. This was to protect the safe space they had created for women, but also to manage the violence that sometimes occurred between members. Drinking and drugs were part of the dances, and in those early years, fights between the women were common.

Womonspace in the 1980s was predominantly white with a few members from Indigenous and Asian backgrounds. The group was more diverse when it came to age and socio-economic backgrounds. A sliding scale for many activities enabled women with lower incomes to participate. Most were Edmontonians, but some women drove two or three hours to attend the dances, travelling from small towns and rural areas across central Alberta. Dances attracted everyone from young women to those who were retired. “There was always, ‘you’re not playing enough country music! You’re playing too much country music!” Lindy joked.

The first Womonspace office was located in Oliver at a women’s centre called Every Woman’s Place. The building was an old house that had been converted and was used by several women’s groups. Womonspace held meetings and maintained a resource library there. Revenue from the dances paid their rent.

In 1982, the group established their own newsletter, “Womonspace News,” through which they were able to share announcements, political news and give women a space to express themselves. Former editor Lindy said, “People whose stories weren’t heard elsewhere had a venue… we didn’t see our stories in the media and in fiction and nonfiction very much. It was rare.”

Laura Lee wrote in the June 1984 issue of Womonspace News: “While it is an exciting prospect to be in a group of all lesbians, we must remember that we are not a homogenous group and there will always be differences among us. We must not ourselves fall for the biggest stereotype that Womonspace is committed to striving against: that all lesbians are the same and [that] you can tell one a mile away in a thick fog, and especially, [that you can] know what she thinks about everything.”

Awareness of the organization spread through a number of sources. The group was mentioned in other LGBTQ publications and within the wider women’s community, through word of mouth at the University of Alberta, at some workplaces and on sports teams. Every Woman’s Place, Common Woman Books and one of the first women’s clothing consignment stores on Whyte Ave carried leaflets and posters for Womonspace events. The word ‘lesbian’ did not appear on posters. Agathe commented that, “Our logo was the two women symbols and that’s as out as we could afford to go, and it worked.”

The very act of identifying as lesbian in Edmonton in the 1980s was politicized. Some members wanted the group to take a more public stance about who they were. Liz Massiah, who was Womonspace’s public affairs officer, was surprised by how much fear there was around being more open. “The organization was very closeted. The people who initially started it did a great job and provided a safe place for women, but the overall message was ‘Don’t share, don’t talk, don’t let people know.’”

Lindy recalled the police monitoring the group at dances. “One lesbian in particular who was a police officer, she used to come in with her coat entirely over her head, obscuring her identity because in those days the RCMP would be outside the clubs, taking note of license plates.” While Lindy was the editor of Womonspace News, she was informed by a Telus employee that her phone had been tapped.

Womonspace members helped organize early Pride events and held open houses during Pride, but their general approach was to avoid involvement in political activities. The fundamental issue according to Agathe was, “How political could we be without jeopardizing this whole group of women who were counting on us to be their safe place?”  By becoming an openly lesbian organization, they risked losing a significant proportion of their membership, and potentially their status as an incorporated society, which would impact their ability to have a bank account and organize events.

Contributors to issues of Womonspace News often went by their first names. Bev wrote in the Womonspace News December 1983 issue: “Disclosure to the wrong individual can strip a lesbian of many of her resources. Especially, the power resource of being personally effectual — that is, having control over what happens to oneself and ones’ environment.” Many women feared losing their jobs or rented housing, becoming estranged from family members, losing custody battles or connections with religious communities if their sexual orientation was known. Similarly, Lindy recalled answering the Womonspace phone line to hear of such issues, stating “I did talk to a lot of women who had very sad stories, you know, their children had been taken away specifically because they were lesbians.” It wasn’t a coincidence either that two of the founders of Womonspace were postal workers. In 1980, the Canadian Union of Postal Workers became the first federal union to add protection from discrimination based on sexual orientation in employees’ contracts.

Excerpts from the Womonspace newsletter, May 1984, volume 2 number 5, pages 3, 6, 7 & 8 . Accessed via the Rise Up Feminist Archive at https://riseupfeministarchive.ca/wp-content/uploads/WSN-may-1984.pdf.

There were, however, consequences of being a closeted organization. A former treasurer stole a large sum of money from the group’s bank account, and the group did not want the negative publicity that would inevitably fall on the organization and some individuals if there was an investigation. “Going to the police meant victimizing ourselves,” Agathe explained. The crime was never reported.

Liz was expelled from Womonspace following a seven-hour meeting that is still painful for her to recall. She was slammed for her political actions that were perceived as a threat to a group that wanted to remain discreet. “I was delighted with the organization. I was delighted to find it, but I think I was pretty naive in underestimating what it actually meant for a lot of those women who were, like a lot of women, struggling in their lives and having all kinds of social issues and Womonspace was a safe place for them, and then when somebody started to make noise about, ‘well, we don’t have to pretend,’ that was too hard for them.”

Womonspace was never a political organization but it did have a big impact in creating safe social spaces for Edmonton’s lesbians in the 1980s and beyond. Collectively, they occupied public spaces including community halls and city parks. They connected over shared experiences and in each other’s company, they could be themselves. Some members were activists and also belonged to gay rights and feminist organizations; others were still firmly in the closet. Womonspace gatherings generated a sense of community that supported women on their own journeys.

Womonspace is no longer an active society but the group continued to host dances and other events into the 2000s. The last dance they advertised was for Halloween 2018 at Bellevue Hall. 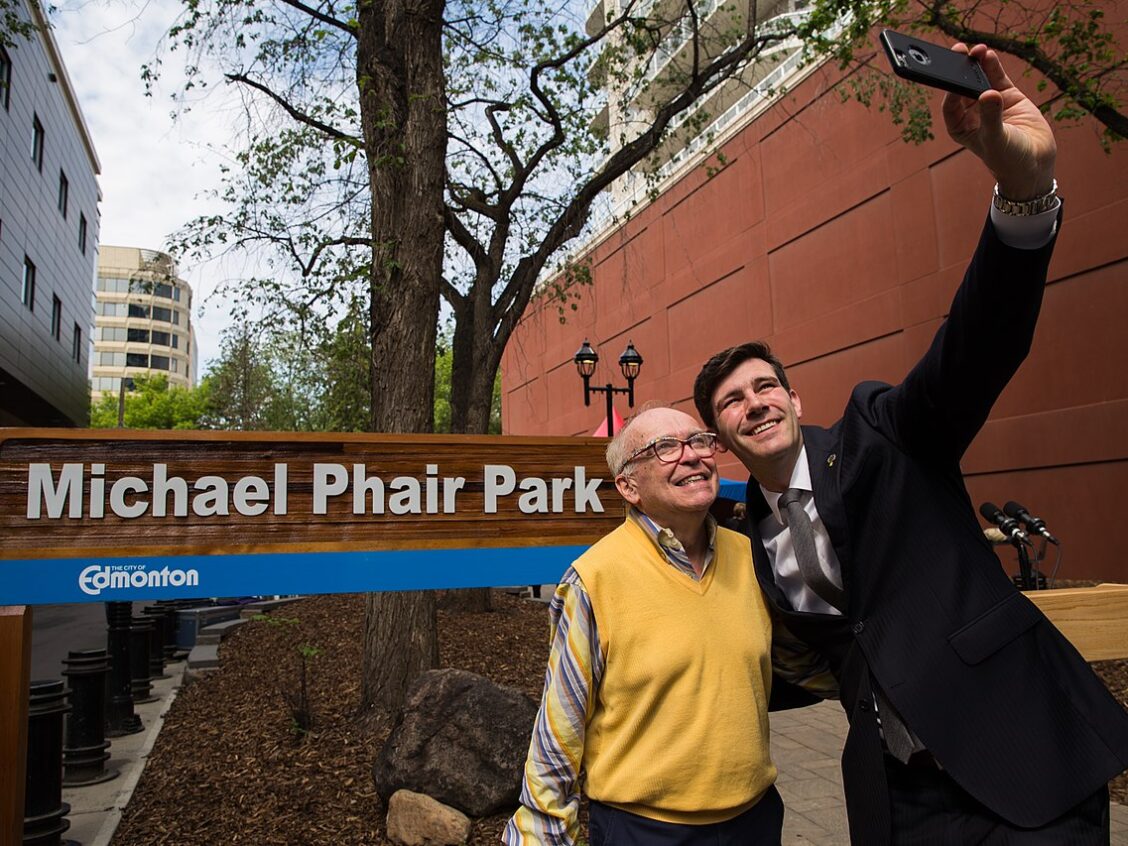 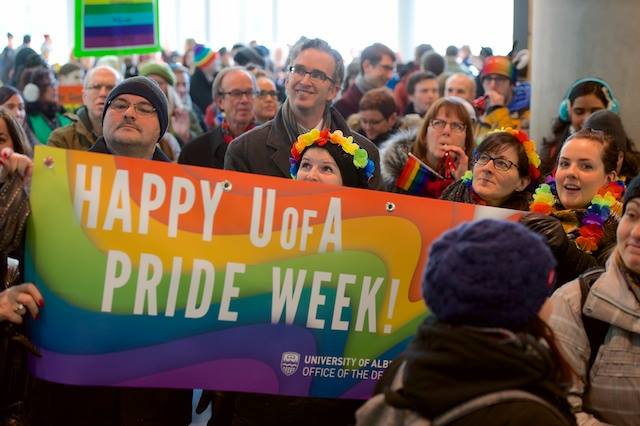 Before the decriminalization of homosexuality in 1969, the University of Alberta’s queer community was similar to those everywhere else in Canada:…