“If you are looking for deep forest, a well-wooded slope of the countryside, an intricate network of trails and deep gullies, draws and knolls, there is a special little corner of Edmonton that you might not know about. It has an odd little name: the Camel Humps.”

The Camel Humps is a park and nature preserve at the border of Strathearn and Cloverdale. From its start near the North Saskatchewan River, it rises to the top edge of the riverbank. From one end to another, it is a diverse mixture of small hills and canyons, woods and trails.

Back a hundred years ago, the river valley rose neat and smooth out of the river flat. It was not much different from how it had been since it was carved out by the raging river at the end of the last Ice Age some 12,000 years ago. Around the time that Alberta became a province in 1905, the riverbank went through a process that produced its unique topography that gives it its odd “Camel Humps” name today.

It was discovered that parts of the riverbank have seams of sand, perhaps left over from ancient rivers. Lime was also available, shipped in on recently built railway lines. Those two things could be used to make sand-lime bricks. These sort-of cement blocks were longer lasting than red baked bricks and easily sold as Edmonton went through its first wave of construction.

The Edmonton Pressed Brick Company took the idea and ran with it. It acquired a section of the riverbank from Cornelius Gallagher who owned a meatpacking plant and much land in Cloverdale. Today, just across Cloverdale Hill Road from the Camel Humps, Gallagher Park (the site of the annual Folk Fest) carries on his name.

The Edmonton Pressed Brick plant produced its first bricks in May 1908, going on to make as many as 30,000 per day, upwards of 5 million bricks in a year. In the beginning, things looked rosy. Even before its first bricks were manufactured, the brickyard was making money by shovelling, shipping, and selling sand. The quarrying of sand would eventually give the Camel Humps their special lay-out. The brickyard was large scale with many employees and a variety of machines and engines. Steam power and electricity were used to power mixers and pack the sand-lime mixture into forms that shaped the bricks.

The digging of sand out of the riverbank was done by men with shovels. It was hard physical work, but at least the plant was set up to benefit from gravity. The digging was done uphill, above the plant, and the sand was brought down to the plant. After the sand and lime was made into bricks, the bricks were loaded still further down, onto rail cars below the plant or on to strongly built horse-drawn freight wagons on the road below for shipping and sale to customers.

The bricks were used to build many Edmonton buildings still in use today. Bricks made in Edmonton were used to construct impressive mansions, schools, hospitals, and government buildings in the young province. The Bennett School building in Cloverdale and Alberta’s Legislature Building, both still standing today, were built at the time bricks were being made at the Camel Humps. The brickyard went into high gear in 1912 when it was taken over by the Hardstone Brick Company, led by Gallagher himself. Among the new staff was James Hodson.

This former seaman (he had sailed around the world twice), Portland newspaperman, and Alberta farmer had brick slurry in his blood. His family had for generations owned a brickyard in Britain. But his employment at Hardstone would be just a short chapter of his life. The demand for bricks dried up when the great new projects were finished, and men went away to war. Hodson was one of them.

June 18, 1915 was the last day a brick was made at the Hardstone plant. The newspapers were filled with discussion of battles in France and Alberta’s upcoming referendum on Prohibition, so the closure went undocumented.

The river rose a full 15 metres from its low water mark, overflowed its banks and inundated river flat communities. It even threatened to push over the Low Level Bridge, which normally loomed high above the river. The Bennett School, located just above the flood line, became a sanctuary for Cloverdale residents forced out of their homes.


The Hardstone plant was a bit higher still so was undamaged, but there was still no hope for the brickyard’s re-birth. Within a few months a liquidator was selling off its machinery and equipment. Eventually all that was left of the brickyard were the diggings up the hill.

Topsoil had been stripped away and piled in high knolls next to the diggings. Likely bushes and trees grew back on these knolls first. Eventually all the landscape took on its present well-wooded appearance. Now, the ups and the downs, the trees and the bushes provide shelter and food for a variety of wildlife. Squirrels and birds are commonly seen, and signs abound of woodpeckers. Perhaps rabbits and coyotes live secret lives among the bushes.

These same ups and downs are great places for kids and toboggans.

It might have been children who first gave the area its fitting name of “Camel Humps.”

Kathryn Ivany, chief archivist at the City of Edmonton Archives, says the name could have originated due to there being two prominent hills, which evoked comparison to a camel’s humps.

A housewife and mother in the area in the 1980s first heard the term from her boys coming home ruddy-faced and white-pinched, laughing and telling about their latest adventure tobogganing on the nearby hillside. However the name came to be, it has become the official name for the area, not quite valley and not quite upland, shared by residents of Cloverdale, Strathearn and the wider city.

The Camel Humps trails are intricate and complicated, trees and hills reduce range of vision, and in one place three trails lie side by side, separated by perhaps 10 metres, but the slope is such that the trails are at three different levels oriented in three different directions.

The “Camel Humps” have long been a mysterious secret land where many generation of kids have had adventures amid nature. “Pure adventure” was how “Wolfie” Wolfgang Janus, now passed, recalled his youth growing up in Cloverdale. He and his best friend spent their youth exploring the river valley, Mill Creek, the Camel Humps and the toboggan hill. He developed a love of nature.

The park’s mystery and home-made fun are still there today. I offer you these tips of getting around in the Humps if it will help. At 98th Avenue east of 91st Street, at the end of the park near the river, you can enter a trail network that runs the length of the park. Another entry is off of 92nd Street near 97th Avenue. This trail climbs to Strathearn Crescent, where a park bench offers a gorgeous view of the river valley and city skyline. West of that bench a trail takes one down to a deep gully hollowed out between a hump and the rising riverbank. Where 91st Street meets Strathearn Drive, a flight of 130 wooden steps offers a less-arduous way to get down to the “Humps.”

The left fork at the bottom of the steps leads to a wide trail coming up from below. This wide trail begins at Cloverdale Hill Road, where a plaque gives a brief history of the Hardstone brickyard. From that wide trail, a side trail winds through the trees and ridges parallel to Cloverdale Hill road. Its three openings to the road perhaps created two camel-like humps. The last opening marks the end of the trail, high up the hill near a wooden lightpost that illuminates the Edmonton Ski Hill. Uphill from that, short, steep paths climb the riverbank to Strathearn Drive.

It is pleasant to walk the park from 98th Avenue all the way to the top of Connors Road. The buzz of traffic is hushed in the woods. The green of trees in summer, the vibrant yellows and reds of autumn, or the clean white snow of winter are a welcome break from the sight of concrete and metal of the city. Such a walk yields surprises.

I found a few steamer-trunk-sized cement blocks covered with lichens almost totally hidden among high weeds. The end of a thick metal cable pokes out of the ground, a reminder of the heavy machinery that once dominated the scenery. I spotted two tree forts. Who knows what imagined pirate’s lairs and pretend gangster hide-outs and make-believe campsites are scattered in the wooded hills and deep shady gullies of the park?

Look for them yourself –or better yet, dream them up yourself –in the Camel Humps.

Tingley and Bunner, The Heart of the City, A History of Cloverdale from Gallagher Flats to Village in the Park, Edmonton: Cloverdale Community League, 2005. p. 51–52, 73, 95 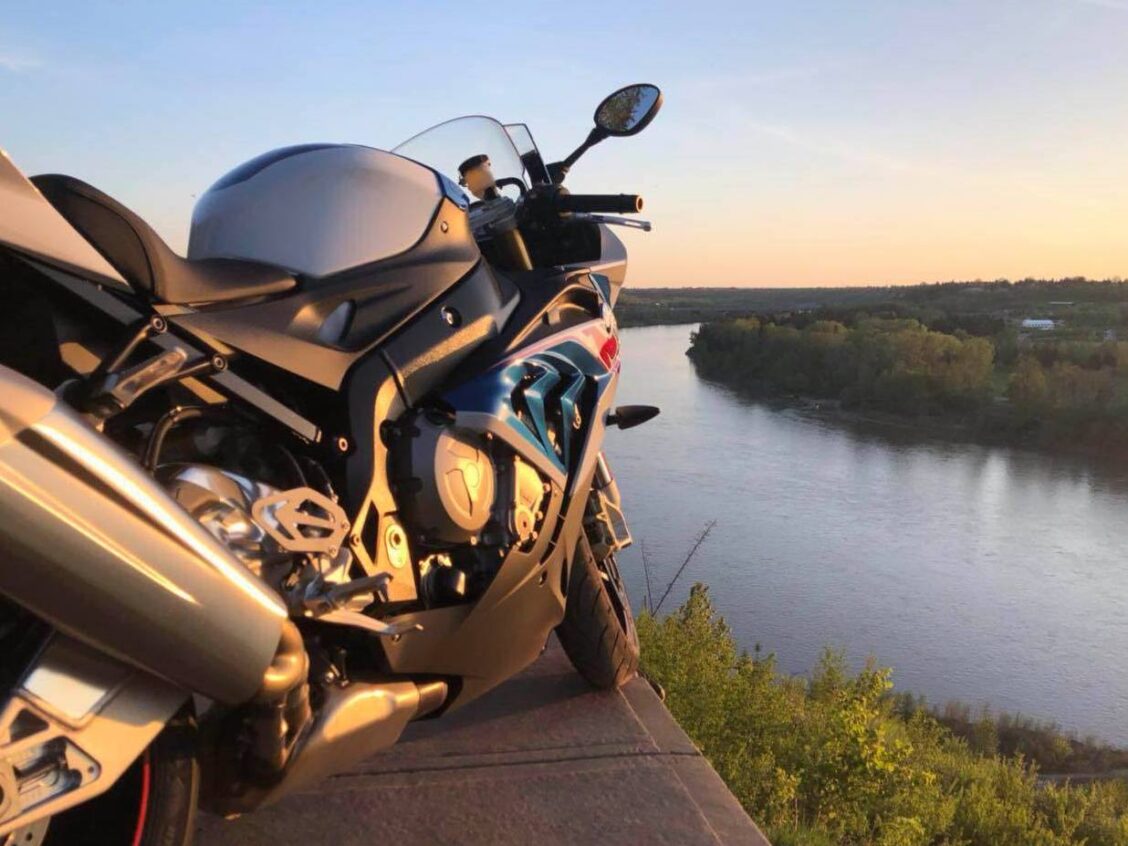 The End of the World: From Found Space to Keillor Point

The summer of 2010 was a memorable time: I started dating my future husband, and I started exploring Edmonton’s river…