“When passing the still-standing community and commercial buildings that were constructed during the 1950s and 1960s it is good to remember the inclusive and friendly small-town atmosphere that was found in Jasper Place.”

This past year, while staying close to home during the COVID-19 pandemic and enjoying more neighborhood walks, my thoughts have turned to neighbourhoods of my youth – Canora and Britannia – in the then fast-growing town of Jasper Place. I invite you to come along with me as I share personal memories from the early 1960s that are drawn from my walks amongst the houses, commercial buildings, parks and schools that still stand today in the two neighbourhoods.

I grew up on 153rd Street in Canora. Most of the houses were post-war builds, but one house just a short distance away from my home always puzzled me. The Richards residence (#1) (10245 – 153 Street) was smaller than its neighbours, and the front door faced south – away from the adjacent street and avenue. I recently learned that this was one of the original homes in the area, having been built in 1932. It was not until the early 1950s boom that the large acreage-size property was subdivided into several standard residential lots. This made me realize that my family and our house were part of the Jasper Place housing boom of the 1950s.

A map of the Canora & Britannia Youngstown neighbourhoods with numbers indicating locations discussed in this ECAMP story. Image created by the author using Google Maps.

One block south of the Richards’ house on the corner of 153rd Street and 102nd Avenue is St. Anne Park(#2). This site was originally the Catholic church my family attended.  St. Anne’s Parish predominately served the large Jasper Place Catholic-Francophone community. The church was built in 1953 from a modified WW2 Quonset hut acquired from the federal War Asset Corporation, making it a very unique building. The long narrow corrugated steel structure rose up in a semi-circular shape. This tight interior design made the worship space memorable for those who attended the church for the decade that it lasted.  On November 20, 1966, the church caught fire and burned beyond repair. Standing on our back porch with my mother, we could see the flames and feel the heat from the fire a block away.  Following this devastating fire, the church community came together to build Holy Spirit Catholic Church in Britannia. St. Anne’s site was re-envisioned as a park, continuing its history as a neighborhood gathering place.

To the east of St. Anne’s Park on 102 Avenue and 149 Street is Apache Seeds (#3). The building (circa 1964) and business that I visited countless times with my parents is still there. It was here that each spring we bought nursery stock, seeds and garden items. Like most families in the neighborhood, my family had a large garden in our backyard- a tradition carried forward from food rationing in WW2.  We grew peas, yellow beans, carrots, potatoes, radishes and beets. We also had raspberry bushes and rhubarb plants.  Everyone in our family helped in the spring with digging the thawing soil and planting the rows of seeds, in the hot summer with the endless weeding, and in the fall with digging up, picking and storing the harvest.  When visiting with school friends, our snacks were always taken fresh from each other’s gardens, especially handfuls of juicy raspberries and crunchy peas and carrots.

To the west, on the north side of Stony Plain Road on 151st Street, is the Imperial Building (#4). It is a two-storey office building built in 1956 to house Jasper Place medical, professional and commercial businesses.  When I was a child, this was a building my friends and I rarely wanted to visit as it just meant trouble.  When my poor eyesight eventually impacted my seeing the classroom blackboard, I went there to see the optometrist to get glasses prescribed. When I was sick enough to miss school, it was a visit to our family physician. When I had a toothache, I went to visit our dentist for a painful drilling and filling. Yes, trips to the Imperial Building were not usually good news for a school-age boy in the 1960s.

Further west along Stony Plain Road between 153rd and 154th Streets is the Jasper Place / Klondiker Hotel (#5)- it stretches almost an entire block. It was a place that my friends and I occasionally biked by despite the warnings of our parents. It had a restaurant and “beverage rooms” on the main floor and another “beverage room” in the basement. What was a beverage room? What did “Ladies and Escorts” mean? The posters, near the beverage room entrances, advertising current and future bands showed us the faces, instruments and costumes of the top live bands of the day.  Above street level was a full floor of hotel rooms. Who stayed in these rooms? The parking lot behind the building was full of vehicles that my family and friends did not drive, like sports cars, muscle cars, convertibles and customized vans.  On warm summer Friday and Saturday nights, I could sit in my backyard and enjoy the sounds from the bands in the bar.

Further along Stony Plain Road between 154th and 155th Streets was the site of Imperial Lumber (#6), which Aaron’s Rent-to-Own occupies today. This hardware business opened in 1953 and occupied nearly a full city block, between its large retail store and adjacent lumber yard.  This is where my Dad and I would buy wood for building fences, finishing our basement, and other ongoing improvements to our new home.  My most memorable trips were going with Dad to buy a piece of glass and then learning how to repair a broken window pane, usually a result of my errant pucks or balls from backyard games.

Further west along Stony Plain Road at 161st Street was an A&W drive-in restaurant (#7) where Hap’s Hungry House restaurant now sits. It was where customers were served in their cars in the parking lot. My parents would bring me there for root beer, burgers and fries on special occasions. It was a treat to have a carhop waitress on roller skates take our order and bring our food out on a tray that she attached to the driver’s window. We would eat our meal in the car while watching and saying hello to other families at the drive-in.

North on 159th Street and into the Britannia-Youngstown neighborhood, I can pass many of the houses of friends I went to school with in the 1960s and 70s. Reaching 104th Avenue is an area in the neighborhood I refer to as the “Catholic Corner.”  On one corner is the unique round building design of Holy Spirit Church (#8), built in 1966. I attended this new parish with my family and our friends, and years later, was married there.

Immediately to the west was the first Catholic high school in Jasper Place, St. Luke’s (#9). This small school was built in 1957 and later replaced by the larger, more sophisticated and modern St. Francis Xavier High School. To the north of St. Luke’s is the original Jasper Place Separate School District offices (#10). It was built in 1956 when the separate school district was formed. Today St. Luke’s and the former school district office are the location of Elves Special Needs Society. The Society is a private, non-profit organization that offers school, respite, and day programs for individuals of all ages with special needs – a great legacy for the buildings.

Most important to me is Our Lady of Lourdes School (#11) located on 157th Street to the east of St. Luke’s.  This elementary school was one of the first three Catholic schools in Jasper Place; the other two schools were Our Lady of Fatima and Notre Dame. All the buildings were designed together, built at the same time, and all opened in 1954. Lourdes was the elementary school that I attended in the 1960s. The school was unique for its time. It was a dual-track school with both French and English classes. It also had a high Indigenous student population as many of the students were from Enoch. The school building is now the City of Edmonton’s Fire Rescue Services Training School, a great new use.

It was at Lourdes School that I made many friends. It was with these friends I journeyed through life and the neighborhoods of Britannia and Canora.  We played on the community league hockey rinks in winter.  In the summer we swam in the nearby Fred Broadstock outdoor pool and played scrub baseball or soccer on the school fields.

When passing the still-standing community and commercial buildings that were constructed during the 1950s and 1960s it is good to remember the inclusive and friendly small-town atmosphere that was found in Jasper Place.  Along with over 500 former Jasper Place residents, I also continue to share our neighborhood memories of this time on a Facebook group appropriately named “I lived in Jasper Place before it became part of Edmonton.” These shared personal histories contribute to keeping the memories of the town of Jasper Place alive today as Canora and Britannia neighborhoods continue to evolve and remain special neighborhoods in Edmonton 50 years later.

The author’s Grade 6 school picture. Image provided by the author.

The header image is of a mural located on the corner of 149 Street and Stony Plain Road. Image courtesy of the ECAMP Team, March 2021. 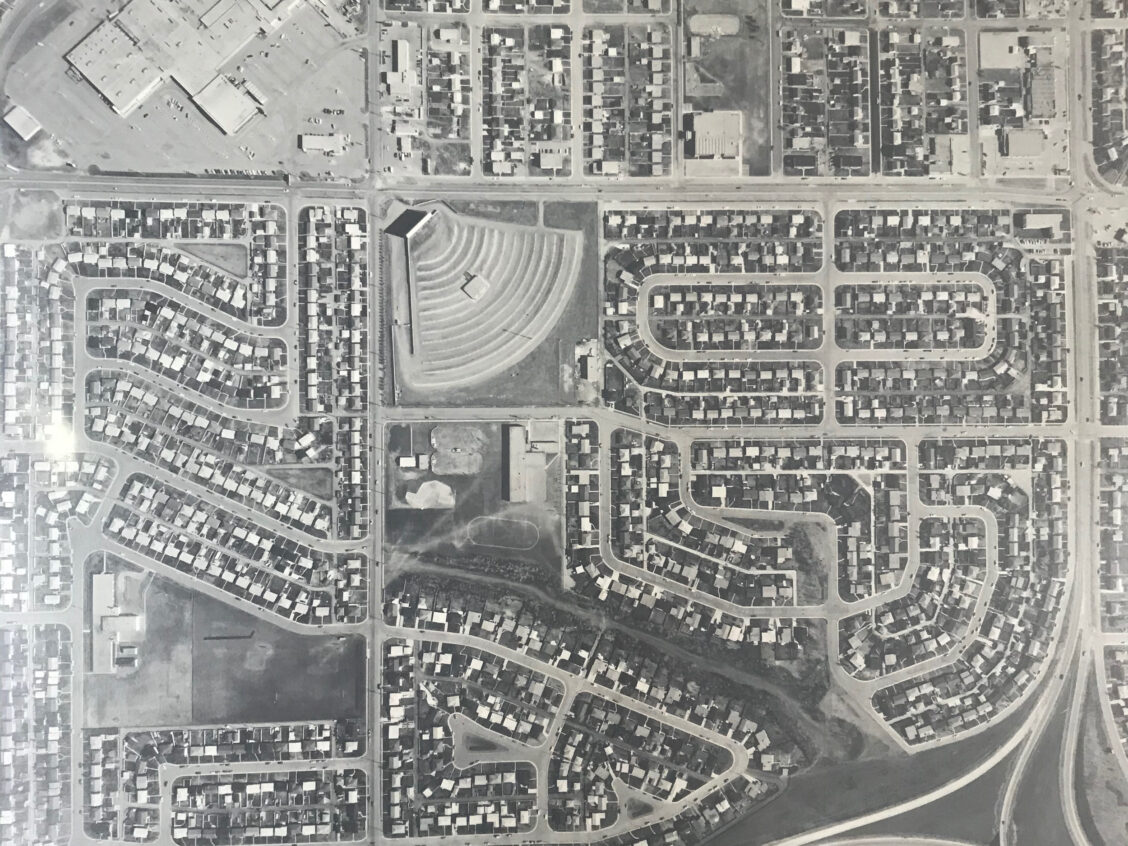 The concept of a drive-in theatre was first experimented in 1933 in New Jersey, though it soon spread to Canada… 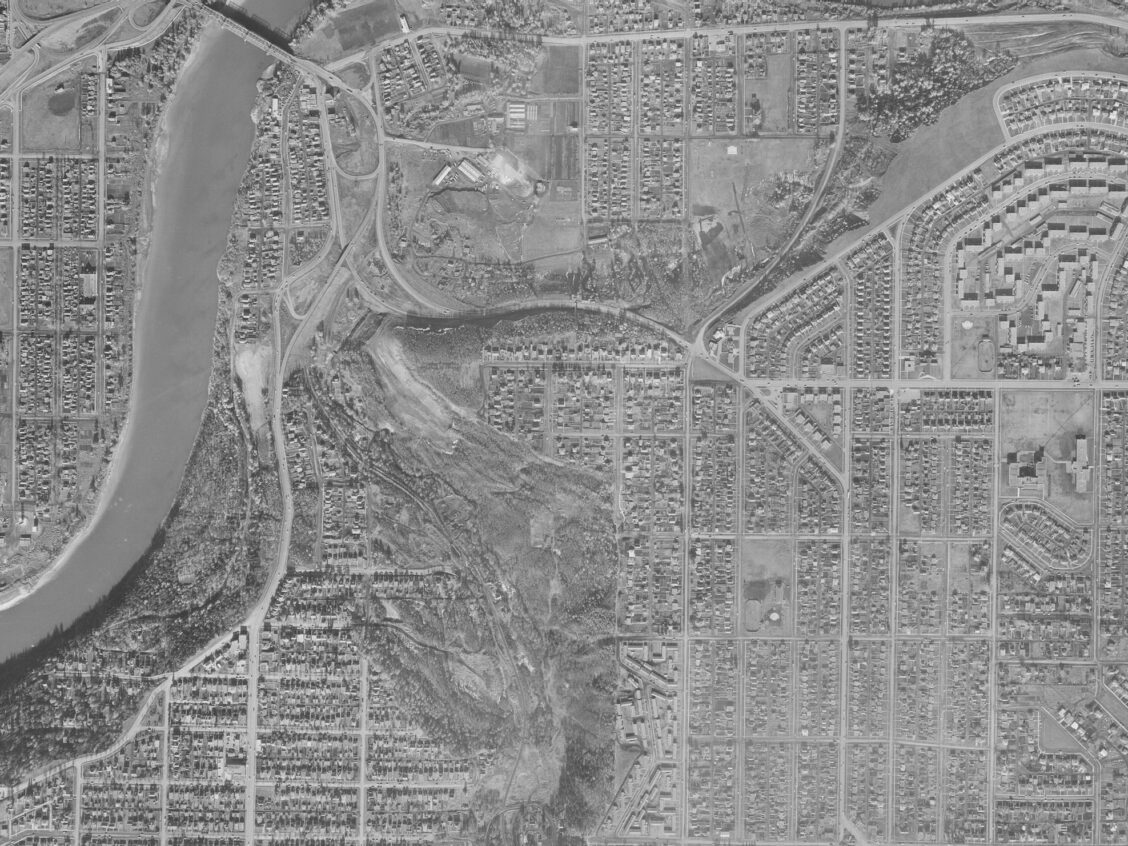 Explore how Bonnie Doon grew and developed from farm land to its current status as an urban, mature city neighbourhood….