They ranged from the diminutive lunch counters at Kresge’s and the Metropolitan on 101st Street north of Jasper Avenue, to cafeteria-style eateries at Zeller’s in the Tegler Building (also on 101st) and Woolworths on 102nd Street

Long before shopping malls and suburbia, the heart of the city was Edmonton’s preferred place to pause for a meal and a cup of coffee or two.  Thousands of workers and shoppers used to converge on lunch counters and small cafes downtown every day to eat and socialize. They ranged from the diminutive lunch counters at Kresge’s and the Metropolitan on 101st Street north of Jasper Avenue, to cafeteria-style eateries at Zeller’s in the Tegler Building (also on 101st) and Woolworths on 102nd Street.  Popular Jasper Avenue diners included the Shasta Café at 10009 Jasper Avenue, the Carousel at 104th and Jasper, and the Coffee Cup Inn at 97th Street.

One of the first and longest-serving cafes was the Silk Hat, which started serving meals at 10251 Jasper Avenue in 1912 or 1913 (accounts differ) and operated for the next 94 years until closing in 2007. It was resurrected in 2008 as The Hat. In the boom times after World War II, war buddies and business partners Ed Weiss and Harry Martineau doubled the restaurant’s length to 140 feet, making it the longest in the city. They installed a neon sign in the front window, black marble on the walls, stainless steel fixtures and vinyl covered booth seating.

Before the booths, there was a lunch counter with swivel stools. From the 1940s through to the end of the century, the vinyl seats were red, green, beige, and then red again. Movie posters on the wall, advertising such Hollywood flicks as The Mudlark, came from the nearby Strand Theatre and adjacent Paramount Theatre in the 1940s and ‘50s. Star Wars memorabilia was added in the late 1970s. Some of the light fixtures and the Rock-Ola jukeboxes were around for more than 50 years. In the 1970s, panelling was installed over black marble walls. The proprietors changed over the years, but the menu remained remarkably intact. Throughout its life, burgers, soups, sandwiches and entrees like breaded veal cutlets and liver and onions were consistent big sellers.

During the 1950s, a clever manager came up with a brilliant marketing strategy to lure customers. The restaurant introduced tea-leaf readers. The idea proved so successful that patrons were lined up outside the door just to have their fortunes told. Long-time tea readers included Madam Charlotte, who was at the Silk Hat for more than 30 years. The last of the veteran readers, Jeannie, retired when she was more than 90 years old. It was a place to digest not only food but also the march of time, the relevance of tradition and the nostalgic aura of Edmonton in the frantic ’50s. While some diners manufacture the ’50s theme, the Silk Hat authenticated it without even trying.

Just a few doors west across 103rd Street, the American Dairy Lunch was operated by Greek proprietors George Spillios and Harry Lingas. It was renowned for the best steak and kidney pie in the city. The cafeteria had as a centrepiece a wall of imitation rock down which water trickled, landing in pool stocked with goldfish. Situated right underneath the Strand Theatre, the north and east walls of the cafeteria were scooped out under the sidewalks, and diners could look through glass bricks and see pedestrians as they passed overhead. The tables had real marble tops and the square support pillars were adorned with gargoyles with grotesque faces. In 1980, when the site was excavated during construction of the new Interprovincial Pipe Line Building, several additional gargoyles were uncovered.

Johnson’s Cafe Advertising visible outside the Hotel Selkirk, circa 1932. Image courtesy of the City of Edmonton Archives.

Another famous downtown diner was Johnson’s Café, started in 1920 by Constantinos Yeanitchous (by some accounts Giianitsiis), another Greek immigrant. The predominantly Anglo-Saxon population couldn’t pronounce or spell his name, so he shortened it to Con Johnson. His café was located in the Selkirk Hotel, on the southwest corner of Jasper Avenue and 101st Street. It wasn’t long before “meet me under the clock at Johnson’s” became a popular phrase, and everyone in the city knew the spot.

A story in the June 13, 1963 edition of the Edmonton Journal, written by Ken Preston, said the restaurant was a place people loved to gather. “Smack dab in the centre of town, everybody knew Johnson’s. But it had more than a favorable location working for it.” The café served delicious meals on starched white tablecloths. “The service was first class and so was the food,” Preston said. “It also had atmosphere, an elusive thing to define. Whatever it is, Con Johnson’s restaurant had it in spades.”

“Big in heart, big in size, he had a hello for everybody. He endeared himself to Journal newspaperman whose financial condition then is what their contemporaries experience now – mostly broke.” The Journal paid its reporters every Friday, and sent the checks to the bank of Montreal for deposit. “First man in the bank Friday was Con Johnson who collected on his IOU’s a shade ahead of a reporter’s first Friday coffee break,” Preston wrote. “He was fast.” In 1924, Johnson brought his 14-year-old nephew Chris Diamond to Canada from Greece, and he was soon working in the restaurant. When Con died in 1953, Diamond and George and Stan Campbell took over.

Fire destroyed the Selkirk Hotel in December 1961, and the café moved a few doors east to 10075 Jasper Avenue, next to the Odeon Theatre. The new 3,500 square foot location opened in October 1963 with seating for 150 in the licensed dining room and coffee shop and another 75 in Chris’ Cocktail Lounge. Construction of the new Capitol Square complex sounded the end for the café, and it closed for good on August 31st, 1972. Chris Diamond died September 26th at the age of 57.

Writing in the November 16th, 1972 edition of the Edmonton Journal, sports scribe Jim Coleman remembered it as an important cultural establishment. “Johnson’s Cafe, during the threadbare ‘30s, was the gathering place of Edmonton’s sporting scribes, who were long on culture even if they were very short on cash.” 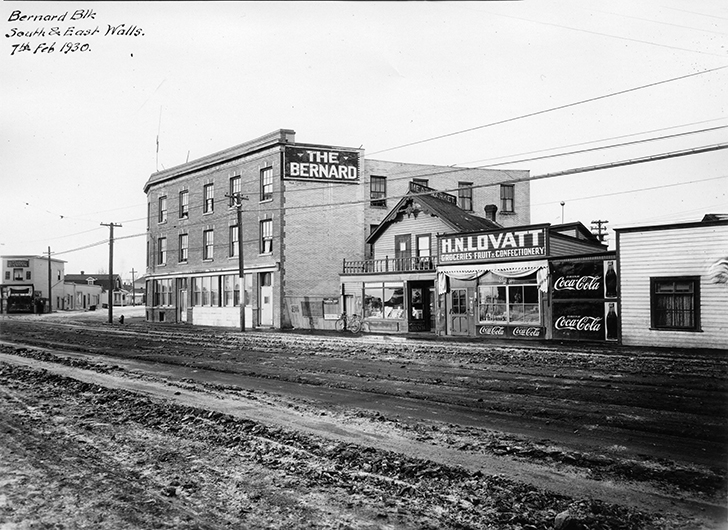 A bell jangles as the weathered door creaks open and the smells and memories flood back:  being six years old,…