Coming from a land of fjords and mountains, they were drawn by the opportunity to own relatively flat land – lots of it! – for affordable prices, and the Prairies held particular appeal. Many settled around Camrose, Viking, Bawlf and, of course, New Norway, while others decided to stay in Edmonton.

One hundred years ago, Edmonton’s small community of Norwegian newcomers gathered together to start the Nordpolen (North Pole) Lodge No. 143 as the local chapter of the Sons of Norway. It was just the third in Canada, after branches in Vancouver and New Westminster, B.C.

Sønner af Norge, as it was called in its mother tongue, was established in Minneapolis, Minnesota in 1895 partly as a way to help Norwegians who were having financial trouble starting new lives in the new land. A sister society, Daughters of Norway, was formed in 1897.

Over time the secular fraternal organization made its mark as a valued tool to celebrate and preserve Norwegian language, culture and heritage. Today the Sons of Norway has nearly 62,000 members at 397 lodges in Canada, Norway and the United States.

With the completion of the Canadian Pacific Railway (CPR) in 1885, the federal government’s campaign to encourage Anglo-Saxon immigration into the West kicked into high gear. Norwegians were one of the favoured groups, and advertisements encouraged those living in Norway and those who had migrated to the United States to consider moving to the Canadian West.

Coming from a land of fjords and mountains, they were drawn by the opportunity to own relatively flat land – lots of it! – for affordable prices, and the Prairies held particular appeal. Many settled around Camrose, Viking, Bawlf, and, of course, New Norway, while others decided to stay in Edmonton.

Among the earliest was the Berg family — Gilbert (Gulbrand Berge), his wife Anna Iverson, son Edwin, and daughters Alma and Mabel, who arrived in 1894. Gilbert, Anna and Alma had landed in Calgary in 1887, and that’s where the next two children were born.

Research conducted by historian Kenneth Domier, a retired University of Alberta engineering professor, reveals that Berg started a general store at 9833 Jasper Avenue shortly after arriving in Edmonton. He also operated a bakery in his residence on Jasper Avenue between 104th and 105th streets.

In 1909 Berg and four other Norwegian-Canadians — Martin Bolseng, H.E.Floen, H. Gullikson, and H. Heamingson – came together as charter members of the First Scandinavian Lutheran Church. The first services were held on February 20, 1910 at St. John’s Lutheran Church, and then shifted for a time to the Dreamland Theatre at 9697 Jasper Avenue.

A new church was built in 1913 at 10927 94 Street. Floen’s daughter Bernice was the first child to be baptized. The name of the church was changed to Central Lutheran Church in 1936. One hundred years after it was built, the building survives and continues to serve the community as the Edmonton New Life Chinese Lutheran Church.

Longing for the ski jumps of home, Edmontonians of Norwegian ancestry spearheaded formation of the Edmonton Ski Club in 1911, first of its kind in the country. Club members built a south-facing ski jump on the 112th Street hill overlooking the Victoria Golf Course and staged what may have been the first jumping competition in all of Canada right after the Christmas of 1911.

A year later, the skiers raised the money needed to build an even better north-facing jump on Connors Hill, which reportedly cost $47.05. It opened on New Year’s Day in 1913 and lasted until 1927, when it was condemned by the City and dismantled.

A more robust structure was constructed on the Connors Hill site in 1934 for $1,400. To accommodate trolley buses, the road up the hill was realigned in 1950 and it travelled right under the jump. As Edmonton prepared to host the Commonwealth Games in 1978, the 44-year-old wooden structure was deemed unsafe and torn down.

Norwegian Canadians swelled with pride in May 1913 when famous Norwegian explorer Roald Amudsen, the first to win the race to the South Pole the previous December, visited Edmonton to regale citizens with his tales of adventure. He was greeted like royalty when he arrived and treated to an official dinner by the City, and driven around to greet the crowds before he spoke to a large, enthusiastic crowd at the McDougall Methodist Church.

Prior to the formation of Sons of Norway Nordpolen Lodge, a group of Norwegians formed a Skandinaviske Ungdoms Forening I Edmonton (Scandinavian Youth Club in Edmonton) in December 1911. It was also known as the Scandinavian Literary Society.

“Although the new society was composed almost entirely of Norwegians and its main interest was in Norwegian literature, they organized a celebration of Norway’s Independence on May 17, 1912 called Syttende Mai,” Domier says.

They also published a paper called Vikingen, which became a forum for literary discussion and a place to debate hot political issues of the day, including women’s suffrage rights and alcohol prohibition.

It was during this time that immigration to Canada from the Scandinavian countries peaked. An article published in the February 5, 1913 edition of the Edmonton Bulletin put the city’s Norwegian population at about 1,000, and the total in Alberta at 20,000.

But the coming of the First World War brought an end to the growth. The Scandinavian Youth Club ceased operations and activities at Nordpolen Lodge were scaled back. Many Norwegian Canadians left for active service, and some did not return.

Those that did helped resurrect the old spirit, and in 1927 decided a name change was in order. They considered the old name Nordpolen not appealing, and geographically incorrect in any event. So they decided to call it Solglyt, “more in harmony with sun-rich Alberta,” the lodge’s newsletter noted. For the first time, they invited women to join.

And what about the Bergs? Well, Anna Iverson-Berg died in 1902, and Gilbert continued working in the grocery business and raising their children. He was listed in the 1912 Henderson’s city directory as a grocer at 572 Jasper Avenue East (9663 Jasper Avenue today) and his residence was at 10740 125 Street.

A feature published in the November 14, 1912 edition of the Norwegian language newspaper Norrøna reported that Berg was largely retired and renting out his store. It was boom time in Edmonton, and he was quoted as saying he was earning more that way than he could by selling “prunes and Norwegian herring.”

Gilbert remarried around 1910 to a woman named Helen and the couple moved to the summer village of Lakeview on Lake Wabamun. In the early 1930s the Lakeview café they operated and their attached living quarters were destroyed by fire.

Special thanks to Kenneth Domier for research assistance with this article. 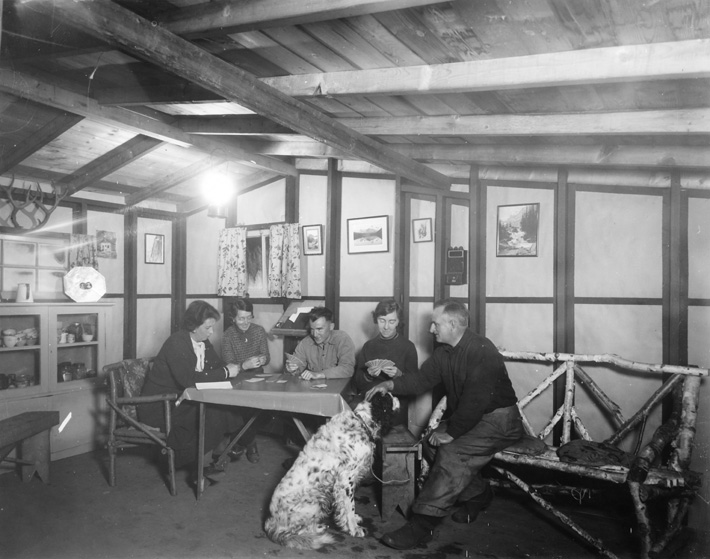