Every sitting of the Legislative Assembly of Alberta begins the same way. The Sergeant-at-Arms, chief of security and ceremony at the Legislature, carries the province’s royal mace into the Assembly Chamber. Leading the Speaker’s procession through the ornately carved mahogany doors, he places the golden sceptre on the Clerk’s table and officially begins the day’s proceedings.

In its simplest terms, the mace represents the authority of Her Majesty the Queen to create law and to rule the realm. The mace is bequeathed to the people’s elected representatives, symbolically demonstrating that the monarch has entrusted them to make laws in her name. By tradition, it must be present in the chamber for any sitting to be considered legitimate.

The New Legislature Mace in the Legislature Chambers. Image courtesy of the Alberta Legislative Assembly Office, 2016

The parade of the mace into the chamber is a parliamentary tradition which goes back hundreds of years, to the very beginning of British democracy. In Alberta, it’s been happening since March 15, 1906—the opening day of Alberta’s first legislative session.

Because the first group of MLAs had not yet assembled, they hadn’t chosen an official capital city or a permanent site for the Legislature building (whose construction didn’t begin until 1907, after the Legislature lands were purchased from the Hudson’s Bay Company, adjacent to the last Fort Edmonton). So the very first legislative assembly session was held at a hockey arena. The Thistle Rink on Jasper Avenue was Edmonton’s largest room—the only place capable of hosting the 4,000 people who turned up from across the province to witness the opening ceremony. The organizers hung flags from the rafters, installed pews from nearby churches, and covered the ice with sawdust and carpets before the members’ desks and Speaker’s dais were brought in.

Anticipation mounted in the weeks leading up to the first session. The newly minted Albertans were eager to see Lieutenant Governor George Bulyea, Premier Alexander Rutherford, and all 25 MLAs in action. They were equally excited to view the province’s new mace, described by the Edmonton Bulletin as a “time-honored gilded bauble.”

“A mace, the symbol of authority, is being manufactured in Calgary, so that the legislators will be able to transact business in the name of the King… An Alberta goldsmith has charge of its construction, and it is expected that he will turn out a glittering emblem of authority that will vie with any of its predecessors in other provinces.” ¹

This glowing and optimistic description wasn’t quite in line with reality. Just like the improvised meeting place, Alberta’s first mace was a hastily assembled patchwork of makeshift materials. The Legislature initially approached Watson Brothers Jewellery in Calgary to supply them with a genuine golden mace. But with only a few weeks to go before the opening ceremony and a budget of $150, an elaborate mace wasn’t feasible. Instead, Ernest and Edward Watson contracted out the mace-making project to railway carpenter Rufus E. Butterworth.

Lacking gold or silver or precious gemstones, Butterworth used the materials that were available to him:

The Original Legislature Mace, detail of mermaids around the head of the mace. Image courtesy of the Alberta Legislative Assembly Office, 2016

The head of the Original Legislature Mace. Image courtesy of the Alberta Legislative Assembly Office, 2016

Showing enormous creativity, Butterworth turned all these random pieces of scrap into a work of art. He crafted the makeshift mace with such attention to detail that if you didn’t know any better, you probably wouldn’t realize that the official symbol of Edward VII, King of Canada, was made of pipes and mugs and toilet parts.

Despite its glorious fake-it-till-you-make-it chutzpah, the Legislative Assembly still intended to replace this temporary mace as soon as a more appropriate symbol could be ordered. But the procurement of a new mace took a lot longer than anyone could’ve anticipated. Surely by 1912, when the Legislature Building had its opening ceremony, a permanent mace would’ve been created. Or at least by 1917, when Louise McKinney and Roberta MacAdams became the first women to sit in the Chamber as elected MLAs. Or at the very latest by 1921, when the province’s long-serving Liberal government was swept out of office and replaced by the United Farmers of Alberta.

But no. Not even close. Ultimately, the Legislative Assembly used the “temporary” mace for 50 years. Sitting at the heart of the assembly, the gilded bauble witnessed the rise and fall of eight premiers, the turmoil of the Great Depression, and the economic boom as Leduc No. 1 struck oil. It wasn’t until February 9, 1956, that a new mace arrived to replace the old.

At the opening of the 2nd session of the 13th Legislature, the Civil Service Association of Alberta presented a genuine golden mace to the Assembly to mark the golden jubilee of the Legislature. The new mace, which is much shinier and much less interesting than its predecessor, was designed by Edmontonian Laurence Bonheur Blain and crafted in Birmingham, England. Its gleaming golden face—so much brighter than the dull gold paint of the old mace—is covered with symbols of the province, from bison heads to beavers to sheaves of wheat. Its most fabulous feature is the seven gemstones which ring its crown: Amethyst, Lazurite, Bloodstone, Emerald, Ruby, Topaz, and Agate.

The New Legislature Mace, detail of the head of the mace. Image courtesy of the Alberta Legislative Assembly Office, 2016

Both Premier Ernest Manning and Opposition Leader J. Harper Prowse eulogized the old mace before its successor was marched into the Chamber, Prowse calling it a symbol of “a young country in a hurry.” ² But when the new royal symbol entered the room, all eyes were on its glittering gold.

“As the clerk of the assembly, Raymond Crevolin, made place for the mace on the crimson velvet-draped cradle on his desk, he unobtrusively removed the old gold-painted mace, and dropped it into an open black box beneath. It isn’t really a coffin for the old mace, which is to go first to the provincial library in the Legislative Building and sometime have proud room in an Alberta museum.” ³

The scrap metal sceptre now sits in pride of place next to its replacement, in a display case on the third floor of the Legislature. You can take a free tour of the building and see the odd couple side by side—symbols of the monarch, yes, but also symbols of the different Albertas our province has been throughout its storied life. And if you’re there at 1:30pm on a session day, you can watch the Sergeant-at-Arms take out the new mace, lead the Speaker into the Chamber, and carry on this century-old tradition of the Legislative Assembly. 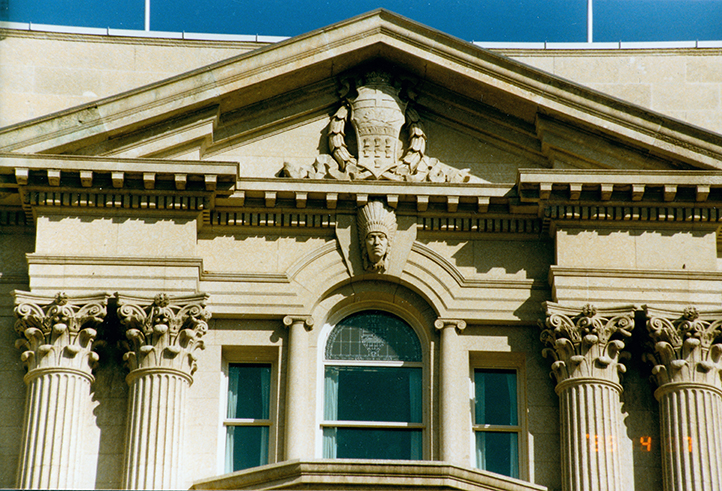