“When the dust settled and I crawled out, there’s a little fellow on a farm tractor who turned out to be a Scotsman. We used his phone and he hands me this glass that’s pretty much pure rye. ‘Get this into you,’ he said with his burr, ‘and I’ll get you another!’” Then when they walked back to the scene of the crash, the Scotsman said, “We better get this one out of here, there might be another one coming along!”

This past May, many of us celebrated the 70th anniversary of VE Day – or Victory Europe Day – the day that marked the end of the Second World War on the European Continent.

Owen Cornish, 92, was there in person on May 8, 1945, flying missions as pilot of a Halifax, a massive four-engine bomber.

His overseas work both as an operational pilot and as a flight instructor for the Royal Air Force has rightly been noted and celebrated, but his connections to the Edmonton flying community are less well known.

Owen was born and raised in Preeceville, Saskatchewan, and joined the RCAF in March 1941 at the age of eighteen. He was soon sent as part of the first group of men to the Initial Training School (ITS) at the University of Alberta. “There was an old building down the way, a teacher’s training school – called a Normal School – where we took our classes,” he remembers. “I was in seventh heaven. Not everybody was picked to be a pilot, but everybody wanted to be one.”

This was followed by Elementary Flying Training School at Blatchford Field, on the site of the recently closed Municipal Airport on Kingsway Avenue. They flew open-cockpit Tiger Moths here, which was to Owen “everything I’d hoped it would be.” While he was in training, he stayed in the residence halls at the U of A.

Photocopies of photographs from Owen’s service. Photos by D. Metcalfe-Chenail

He liked Edmonton so much he returned here after the war to study Dentistry at U of A, then the only Dental School in Western Canada. In September 1950, he joined the 418 RCAF Reserve Squadron, which he enjoyed, but also helped put food on the table for his young, growing family.

“It was an active Reserve Squadron. We were there in case Russian Bears came over the Pole,” he recalls of the Cold War era work in the hangar that now houses the Alberta Aviation Museum. The ‘Bears’ were Tupolev Tu-95s, a large, four-engine turboprop-powered airplane used as a strategic bomber, missile carrier, and surveillance aircraft.

Luckily, he notes, he and his fellow reservists “never had to prove ourselves that way,” as no Bears appeared over the skies of Edmonton. This was especially good considering the equipment the squadron had at its disposal.

“In the 1950s it was B-25 Mitchell bombers and it kind of went downhill from there to Expeditors and a single-engine Otter,” he laughs. “We were just converting to the Hercules [when I retired], which everybody was excited about because it was a wonderful airplane.”

B25, one of the planes flown by Owen. Research by Lech Lebiedowski, source of photographs Alberta Aviation Museum and 418 Squadron Archives

It was in a B-25 that Owen had his closest call during his Reserve years. “It was a Sunday afternoon in 1953,” he recalls. “We had done an army coop thing on the weekend on Vancouver Island in British Columbia. and we were returning on the south route. We got up to about 13,000 ft when the starboard engine ran away and we couldn’t feather it. It was vibrating so it was shaking the aircraft considerably. We were all set to bail out when we broke through and we looked back and saw this green patch, so from 10,000 feet we went straight in and didn’t know where we were landing so we didn’t put the wheels down. If you’re going to belly land you should feather so the prop blade doesn’t break off and come through the cockpit. Well, we dug right in when we landed and broke the aircraft’s back.”

“When the dust settled and I crawled out, there’s a little fellow on a farm tractor who turned out to be a Scotsman. We used his phone and he hands me this glass that’s pretty much pure rye. ‘Get this into you,’ he said with his burr, ‘and I’ll get you another!’” Then when they walked back to the scene of the crash, the Scotsman said, “We better get this one out of here, there might be another one coming along!”

During his decade or so with 418 Reserve Squadron, Owen and his fellow reservists also participated in several Search and Rescue (SAR) operations. He recalls one search in the winter around 1960 or so in another B-25. “That airplane wasn’t aimed for Search and Rescue. We’d fly and track up and down the area but not too much success.”

“This search was out of Yellowknife, up towards the Coppermine. Radio beacons were very few and far between up there, and some of them were very weak. When we went on that search, it took us three times for us to get out of Yellowknife and one fellow kept his pencil on the map and would never take it off, because there are a million lakes up there, and we’d never know where we were unless we kept that pencil on the page.”

“That was a six hour flight because we flew at reduced speeds so the spotters could have a chance to look. Our heater froze up so it was a good job that we were well dressed in our big tall boots and heavy flying suits. At Yellowknife they fixed our heater and then we had the opposite problem: we pretty near damned got cooked to death on the way home.”

While Owen tells stories like these with mirth now, he admits it was the near misses and faulty equipment that eventually convinced him to leave the squadron.

“In the event that I was killed, my wife with our four kids would have gotten only $75,000 dollars – that was it. Regular force, of course, you’d have a pension,” he says.

He and others were nervous for other reasons as well. “It was a hectic time – Atomic scare, the world was going to blow up. We were very leery about Russia.”

The Air Force reserves HQ did not give them any special intelligence. What he knew about the Cold War he says he learned right alongside everyone else reading the newspapers, listening to the radio, and watching TV. “It was all biased. The Russians were always the bad guys, didn’t matter what they did. It was scary times.”

By 1958, Owen was Commanding Officer of the squadron. “It’s all well and good to have the stripes on your sleeve, but when you find out you’re only flying 10% of the time and the rest of the time you’re flying a desk, it’s not all it’s cracked up to be.”

Finally, in 1961, he decided to step away from the air reserves for good. Looking back on those days, he quips: “In my illustrious career, I banged up five of Her Majesty’s aircraft, and I’m still waiting for my German Iron Cross. I can understand when the Queen visits she never looks me up.” 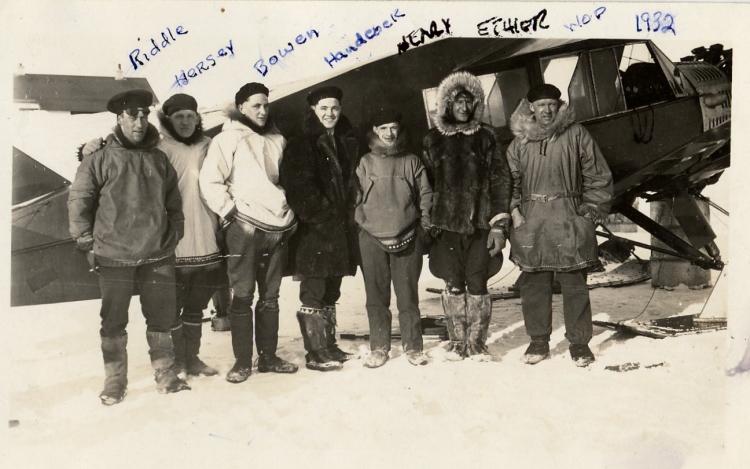 Wilfrid “Wop” May: An Old-School Hero for a New Generation 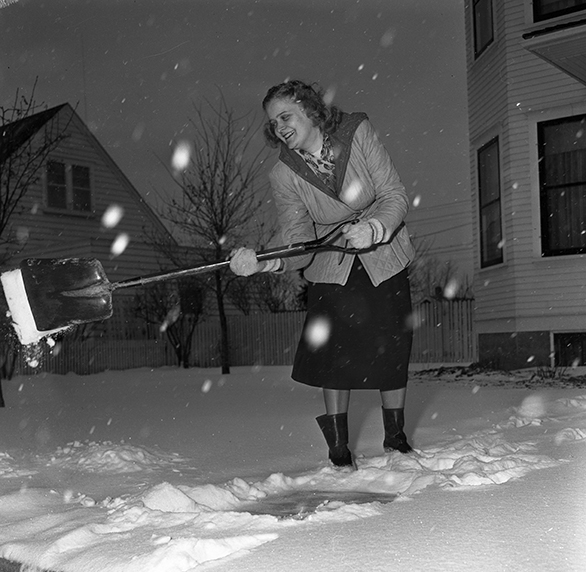 Baby, It’s Cold Outside!: A Brief History of Winter Fashion in Edmonton

As one of the largest Northern Canadian urban centres, Edmonton is known for its long, sometimes harsh winters. For centuries,…