While fur was a common way to keep warm, it was also expensive. One advertisement in the January 13, 1905 edition of the Edmonton Bulletin noted that a ladies’ beaver coat, on sale at the Hudson’s Bay, was $15 – equivalent to approximately $405 today.

As one of the largest Northern Canadian urban centres, Edmonton is known for its long, sometimes harsh winters. For centuries, Edmontonians have been bundling up against the chill from October to April, probably cursing under their breath as to why they live here. Today, we take a look at how Edmonton’s winter fashion trends evolved in step with the city’s growth.

When Europeans came to what is now Edmonton, settlers and Indigenous people learned from one another how to keep warm. Settlers in particular, were unprepared for Edmonton winters.

“As settlers arrived in Edmonton, they may have only had the clothes on their back and were likely ill-prepared for winter.  In the 1880s, very little was available for purchase in Edmonton, and clothing was mostly hand-sewn from hand-spun wool, from local sheep.  Natural wool possesses incredible insulating properties, making it ideal for the cold Edmonton winters,” says Nicole Bach-Labrecque, Historical Costume Coordinator at Fort Edmonton Park.

One important element Europeans borrowed from Indigenous were moccasins, much better at keeping out the cold, wet snow than their European footwear, says Dr. Anne Bissonnette, Curator of the Clothing and Textiles Collection at the University of Alberta.

The Indigenous people learned a lot from Europeans about woven fibres, like cotton and wool, and quickly adapted trade blankets for warm winter clothing.

“A Metis man’s winter ensemble circa 1846 may have consisted of wool undergarments, a cotton shirt, heavy wool trousers and socks, topped with a Capote, an outer garment cut from the heavy wool of the Hudson’ s bay blanket. He would have worn fur moccasins and deer hide mittens, covered with beautiful glass beadwork,” said Bach-Labrecque.

For centuries, wool and fur have been the mainstay of warm winter fashion, Bissonnette explained, even when synthetic fibres became more readily available later on. While wearing certain types of fur—particularly mink—was often seen as a status symbol in the 19th and 20th century, fur was worn by nearly everyone because it was the best way to keep warm—the best example of this being the RCMP buffalo coat, which were replaced in the 1930s for the force, or the RCMP muskrat hat, which is still worn today.

Since 1899, Revillon Frères, a French company that held a warehouse and shop. Its most recognizable location was built in 1912, at 10221 – 104 Street, what is now the Boardwalk Market complex.

“At the time of its construction in 1912- 1913, the Revillon Building was the largest and most sophisticated warehouse in western Canada. Constructed of reinforced concrete, it had all the modern amenities, including electric hoists, an electric passenger elevator, an automatic telephone exchange, pneumatic tubes for sending written messages within the building, and spiral shipping chutes,” notes a booklet for the Historical Walking Tours of Downtown Edmonton.

Edmonton was chosen as the depot due to its close proximity to fur-rich northern Alberta as well as its status as a railway hub, and eventually the city became the second-busiest fur depot in Canada after Montreal. According to the book “Edmonton in Our Own Words”, the Edmonton fur region –  which stretched from The Pas to interior British Columbia and up the Arctic coast – was bringing in $4 million worth of raw fur by 1920.

A more affordable way to keep warm was by incorporating wool into one’s wardrobe, Bissonnette says, with people being encouraged to wear wool undergarments year round.

Aside from adding warmth, wool was also seen as a healthier alternative, as it allows the skin the breath, wicks away and absorbs perspiration without becoming clammy, and is dirt and odor resistant.

Throughout history, men have stuck with the 3-piece suit (there’s a reason it’s a classic): jacket, waistcoat and trousers,  Bach-Labrecque says, often wearing a heavy greatcoat and a fur or wool hat.

Typical Victorian and Edwardian fashion, particularly for women, involved plenty of layers, especially in the winter. As we can see from this 1884 Eatons Catalogue, men, women and children wore wool combination suits – made up of a top with long or short sleeves as well as long johns or shorts.

Women would wear silk or wool hosiery to keep their legs warm. While you may think this would be 1) terribly itchy or 2) terribly hot, wool can absorb up to 30% of its weight to leave the wearer dry (unlike cotton) and both merino and cashmere wool are soft against the skin. In fact, even up into the 1950s, the majority of bathing suits were also made with wool. And now, despite the innovations in synthetic fabrics, most athletic wear designers are using more wool in their designs.

As we move into the 1930s and The Great Depression, and then the 1940s and the Make Do and Mend wave, we see a lot of recycling and creativity in reusing old winter clothing, with a bigger focus on woolen coats versus fur coats, Bissonnette notes. Adult clothes would be repurposed for children to wear, while men’s suits – with their higher quality fabric and tailoring – were refashioned into smart women’s wear.

Even well into the 40s, people still wore woolen and silk underwear for warmth, except for when rations restricted it. This is further evidenced by more and more women wearing pants in the workplace, says Bach-Labrecque, especially since fabric rationing meant shorter coats and no silk stockings to keep the cold out.

Fur was popular into the 1980s, until animal rights activists started speaking out against fur farms, and can be a controversial subject for some. While real, ethically farmed fur is still available in Edmonton, some even sourced in Northern Alberta, the majority of fur is likely faux-fur, made with petrochemicals.

Indeed, it would seem that anyone looking to improve their winter wardrobe should take some advice from our ancestors: wool and fur – and for goodness sakes, cover those ears! 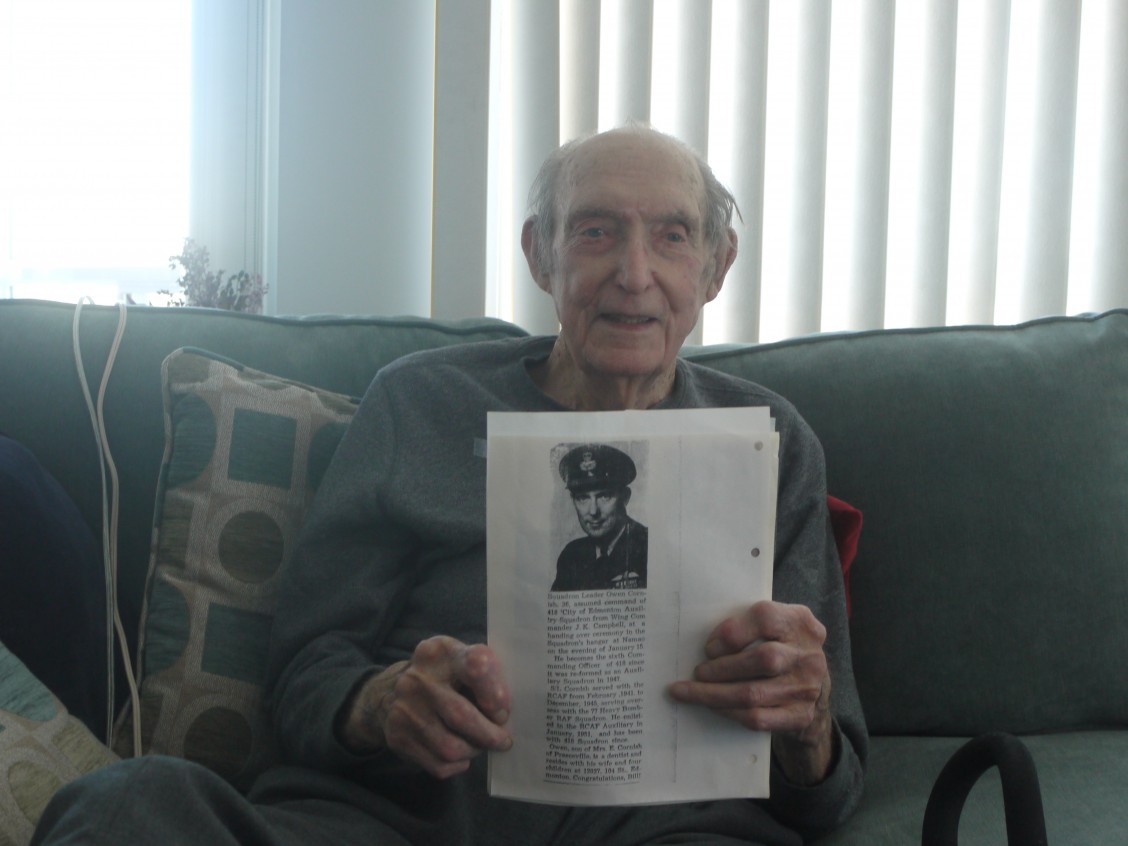 This past May, many of us celebrated the 70th anniversary of VE Day – or Victory Europe Day – the… 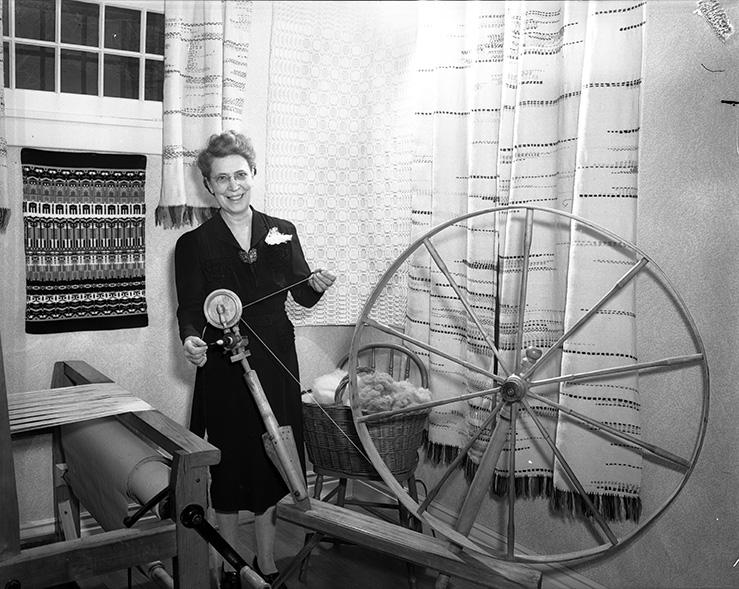 History of the Edmonton Branch of the Canadian Handicrafts Guild, 1911-1966

Craftwork, as a hobby, has seen a resurgence of popularity recently. Knitting for example, has become a social act with…