Even in the days before Twitter, Facebook, texting and email, news still traveled fast when the ceasefire between German armies and Allied forces was signed on November 11, 1918.

That morning’s Bulletin’s front section was full of the latest war news, from details of the armistice to coverage of local celebrations that broke out in the wee hours of the morning.

[S]oon, although it was 2 o’clock in the morning, a gigantic jollification was in progress. Crowds gathered as if by magic. the fact that there had been a snowstorm ‘cut no ice’ whatever.

The [Bulletin] papers sold like the proverbial hot cakes, people literally tearing them from the hands of the newsboys in their anxiety to get the news.

The shriek of railroad sirens, the ringing of bells and a wild chorus of cheers was the first indication to expectant Edmontonians that the hoped for armistice had been accepted by the Germans.

All Edmonton had been sleeping with one eye open, and it was not many seconds after the official flash was received over the Canadian Press wires into the Journal office that the streets were alive with merrymakers… [a]lthough the hour was late…and weather conditions were of the worst, all thoughts of flu and kindred evils were set aside.

In that day’s Bulletin, page after page of war coverage followed — including stories like “High Lights of the Great War” (perhaps a better title would have been “A Timeline of the Great War” as I don’t think anyone would call Archduke Ferdinand’s death a highlight in the modern sense of the word).

Another story, nearly lost in the jumbled layout that is a hallmark of early 20th century newspapers, is that of the courier commissioned to deliver the Armistice telegram who was delayed by what he thought was continued German fighting but was in fact an ammunition depot that had caught fire.

The Edmonton Journal, at the time still in its infancy and not yet the city’s newspaper of record, also covered the Armistice with enthusiasm, in a style not unlike the Edmonton Sun of today.

“HUN SUBMITS” bellowed the front page. Underneath, a cartoon titled “‘Nuff Sed” was prominently featured: a grinning lion smacking his lips surrounded by bits of German uniform and weaponry.

Another story, further in that day’s news, noted that “Peace will not depress Canada, say Ministers” and that “readjustment difficulties to be very fully met and agriculture increased.”

Other major news stories from Monday, November 11, 1918 in Edmonton revolved around the Spanish Influenza epidemic that rocked the city, and is indeed a major moment in the city’s history when it comes to the First World War.

In the Bulletin, the province issued a statement reminding residents that “Mask Order Is Legal and Can Be Rigidly Enforced Where it Is Being Openly Disobeyed” in order to prevent further spread of the Spanish Flu. The paper reports that thirteen people died of the Spanish Flu on Sunday, November 10 and twelve died on Saturday, November 9—although the writer does note that “… it is hardly fair to charge all the dead on Sunday’s and Saturday’s list of fatalities to Edmonton. A number were those of patients brought in from out of town and were already in a desperate condition.”

In total, the Spanish Flu pandemic claimed the lives of 614 Edmontonians.

Despite war’s end, both the Bulletin and the Journal kept up the push for war bonds, a much needed debt security needed to keep Canada’s inflation down and capital for military and operations up. War bonds continued to be sold well into 1919. In the Journal’s November 11 edition, there were at least eight war bond advertisements in the first four pages alone. (In contrast, the Bulletin seems to only have one war bond advertisement, but much more news content, in their first four pages).

That night, as the Bulletin recounted the next day, Edmonton celebrated with a torchlight parade, touted as the “Noisiest Night in City’s History” and the lieutenant-governor declared a general holiday for all of Alberta to accommodate the celebrations.

From the rising of the sun to the going down of the same, and far into the night, Edmonton celebrated the victory with the pent-up energy and enthusiasm which had been accumulating for four long years and more.

Many businesses shuttered their doors, and practically everyone who wasn’t laid out with Spanish Flu hit the streets to celebrate with an impromptu parade, with cars packing the streets and nearly every Edmontonian carrying a flag.

On Howard Avenue a huge bonfire of tar barrels and lumber was kindled and around it leaped and whooped painted masquers, in more than Indian war dance.

It was an entirely good-natured and orderly crowd. In everyone’s mind was the feeling of joy and relieved that the black burden of the war was lifted at last. It seemed too good to be true. It was hard to realize that it was over and that the noise of cannon and machine-gun was really hushed, perhaps for all time. The people had to grow accustomed to the idea of peace just as they had to that of war.

The Bulletin’s November 12 coverage expanded on the dawn of a new age that the world was just beginning to see. The headline “Victory, But Not Yet Peace” seems to sum it all up perfectly—while the war was officially over, there was still much to do in Edmonton, Canada and around the world to prepared for the post-war reality.

But armistice is not peace. The very completeness of the Allied victory has created serious complications. … The anarchy that was overtaken Germany is not democracy. It is tyranny in its worst form. … It is to be hoped that the fruits of the victory won at such stupendous cost, will be gathered fully and completely, in the terms of the peace that will be made.

Edmonton, too, would take time to adjust to post-war life, though it was not nearly as sizeable of an adjustment as Germany. While the statistics for Edmonton are hard to track down – we do know the University of Alberta alone sent 484 students and staff to the front – 45,136 Albertans contributed to the conflict. Over 5,000 would die. 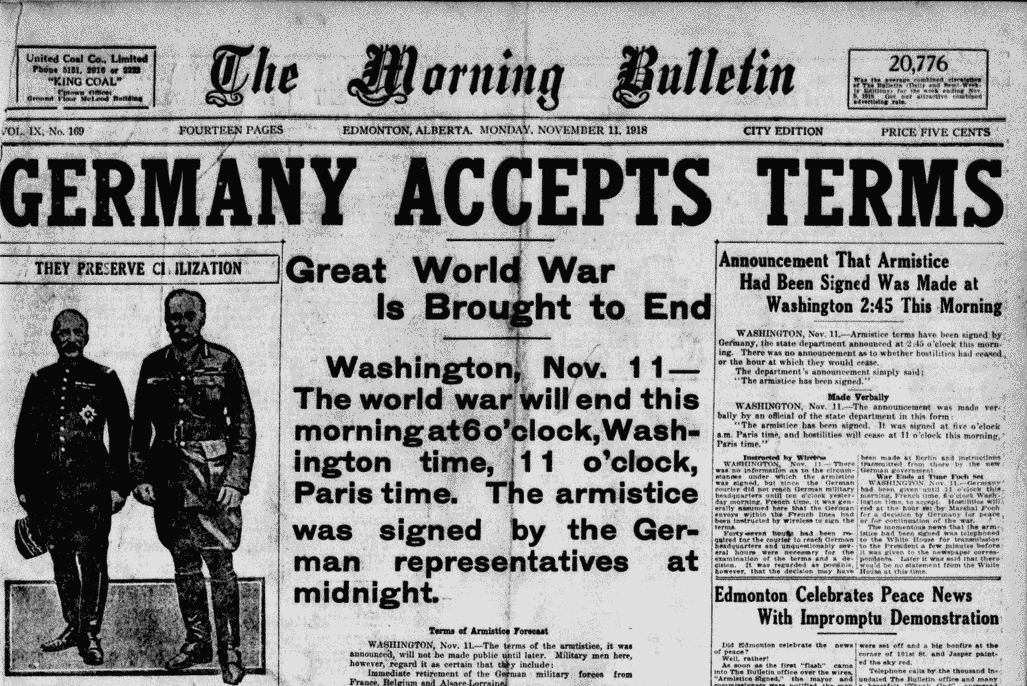 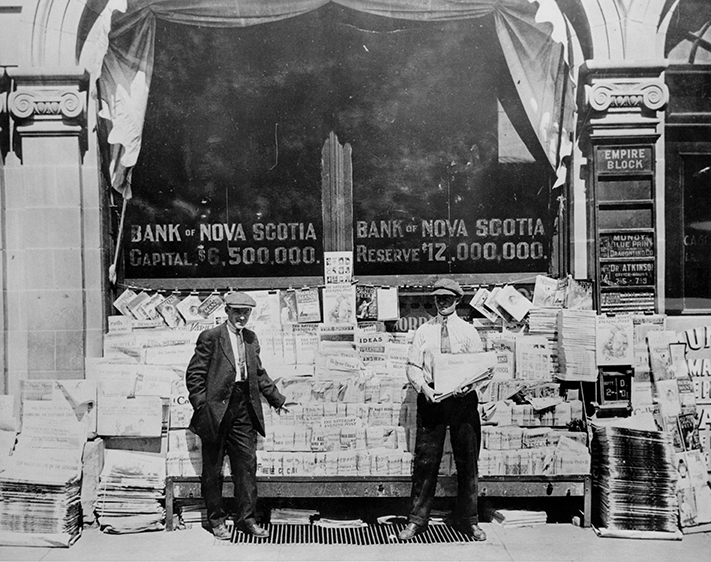 For 70 years, Mike’s News Stand was an Edmonton institution. For most of that time, it operated from a storefront…